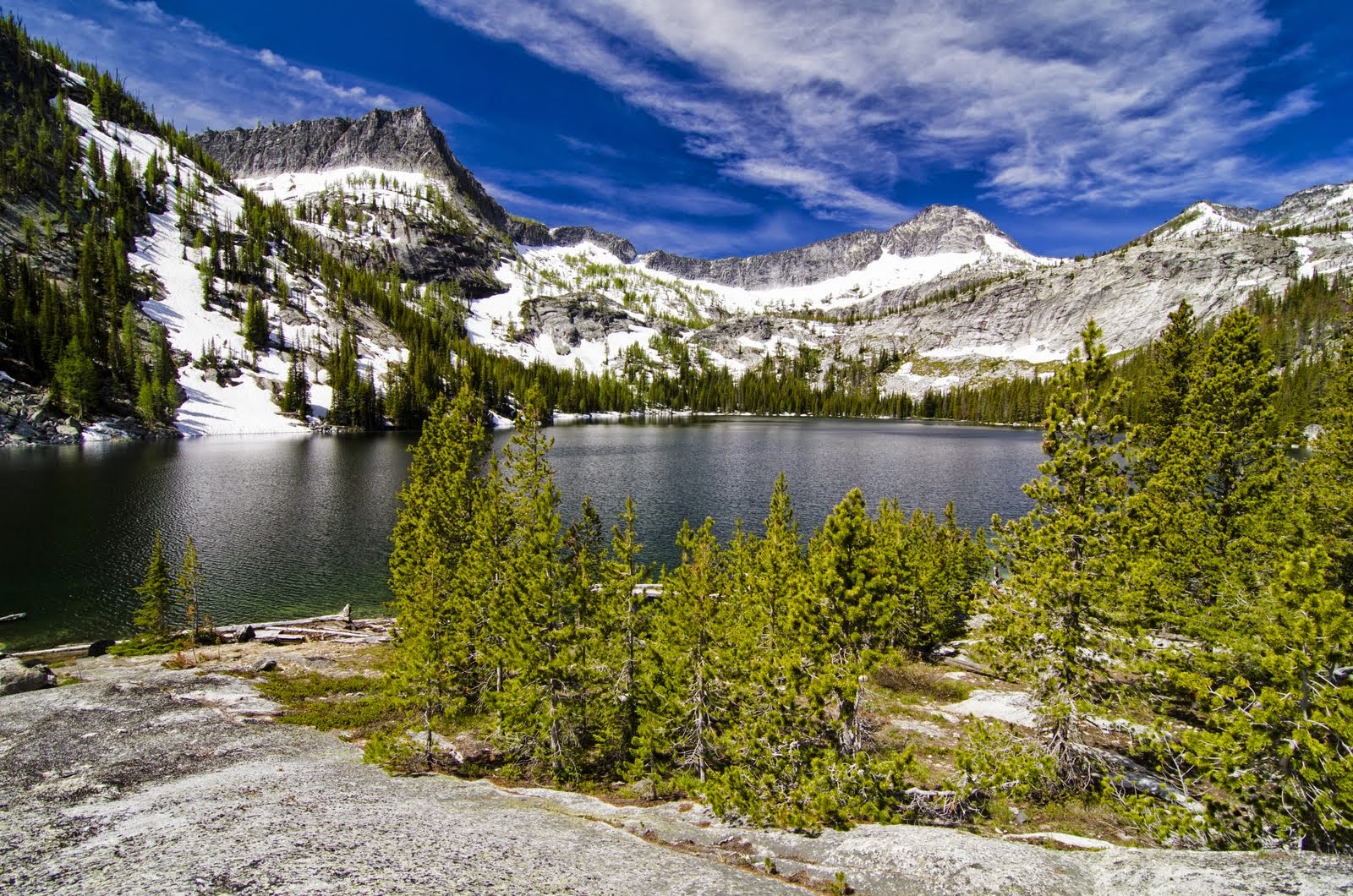 Tara and I both had some time off this week, so we made plans for a quick overnight in the Bitterroot.  Originally, we were hoping to get up to Fish Lake and beyond, but upon learning that the Lost Horse road was closed for spring conditions, we were forced to audible out to something different.  After some quick thought, I decided that we should aim for Canyon Lake.  It would be a short, but strenuous hike, and given the time of year, we'd be rewarded with a home in some pretty spectacular springtime sub-alpine country.

Tara showed up at 8:00 with a thermos full of coffee for the both of us and we were out the door by 8:30.  Not bad at all.  It's funny though.  Even with the early start (yes, that is early), by the time we picked up some last minute provisions, rolled up the valley, had our original plan thwarted, made our way to the new trailhead, and got everything together, we still weren't on our way until around noon.  Pretty standard, really.

Now, I did visit this lake once before.  It was a number of years back, but it was only for a day hike, and it was much later in the season.  Honestly, while I knew it was pretty, I couldn't even remember enough to describe it to someone.  I did have a pretty good memory of the trail though, and I knew that we had a bit of work to do.  It started out as a pretty standard Bitterroot Canyon trail, making its way through fairly uninteresting timber as it lead us upstream toward the valley head.  However, after only 3 or 4 miles, everything changes.  The trail takes an abrupt turn for the skies, and before we knew it, we found ourselves on open granite slabs with a well-earned view over to the raging Canyon Falls.  Great spot for a lunch break.

After a little bit of food and a lot of gawking at the scenery, we were soon on our way again, ready to continue plodding upward.  It was slow going on the very steep trail that often doubled as a small streambed, but given the abundance of wildflowers and views in all directions, it was easy to remain in good spirits.  When we did reach the high point and the entrance to our destination basin, I was immediately hit with that feeling that I just can't get enough of.  I was home again, back where I belong.  As we strolled the last half mile to the lake, we were treated to snow bridges over a rushing creek and glacier lillies for days, a sure sign that spring had only just recently sprung up here.


When we did reach the lake, it was all smiles as we immediately found a tent site and began the usual camp activities that we all love so much.  I took off along the shoreline in search of photos while Tara put a fishing rod together and went searching for dinner.  When I returned, I couldn't help but get a line in the water myself, and when it was all said and done, we had 3 very nice, very edible Cutties that would highlight an already very tasty dinner.

Given the killer meal, the juiceboxes of wine, the ridiculous stars, and the small, but very warm fire, we didn't make it to bed until well into the night.   Sleep came easy in the little blue tent.


Nice leisurely morning today.  Sleep was amazing, so we waited for the sun to heat the tent up before unzipping and greeting the world.  Yep.  Still fantastic.  We didn't really do a whole lot.  Just kind of hung out and enjoyed our environment for awhile.  We both would have been happy to stay there all day, but rapidly rising temperatures eventually told us that the sooner we headed out, the better off we'd be.  It was around noon when we begrudgingly started on our way.

We followed the same route back out, but made sure to take a quick side trip over to a nice little waterfall that we'd spotted on the way up.  The cool water felt wonderful in the already intense heat and Tara made sure to stand right in it, enjoying the full-on refreshment that only a waterfall shower can give.


After that rewarding detour, we began the knee-jarring descent back to the valley floor.  Upon arrival, we stopped for another quick cool down in the creek before a seemingly endless hike out through the timber.  Aside from a bizarre encounter with an overly aggressive grouse and a few chats with some terribly underprepared day hikers, it was a standard hike out, dominated by visions of pizza and beer at the Higher Ground Brewery in Hamilton.